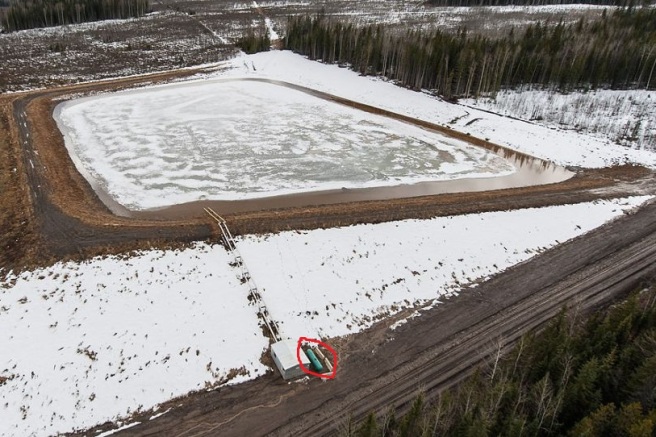 It is reported in the Tyee that Progress Energy, a subsidiary of PETRONAS has built 16 unauthorized earth dams in the Montney basin, Northeastern British Columbia that, for whatever reason, have not been vetted by the provincial Environmental Assessment Office (EAO) . These dams trap water for large-scale fracking activities which involve injecting a pressurized mix of water, chemicals, gases and sand into the ground – a process that has allegedly triggered significant earthquakes in the region. Progress Energy seems to have built these dams between 2012 and 2014 on Treaty 8 land north of Fort St John. Treaty No. 8 land cover 840,000 square kilometres and is home to 23 Alberta First Nations, 3 Saskatchewan First Nations, 6 Northwestern Territories First Nations and 8 British Columbia First Nations. Treaty rights give members of party Nations, shared territorial rights to hunt, fish, pursue cultural activities and build burial grounds; in other words to collectively live their traditional way of life.

In 2013 the government of British Columbia announced a multi-billion dollar LNG investment by Malaysia’s PETRONAS Group of Companies. The proposal was to build an LNG export terminal on Lelu Island. This investment would have made Malaysia the largest foreign investor or, in liberal terms the greatest economic benefactor to our province. Meanwhile, the racial, religious, financial and political funk of Malaysia has been steadily rising in the wake of the the tightly contested 13th general elections of 2013 as well as the ongoing 1MDB scandal.

In BC the promised investment began driving the inherent tribal, territorial, economic and environmental contestations towards an inexorable crisis. This congruence of contexts that I call mine – Malaysia and British Columbia, gave rise to an awakening  in me of a transpacific identity and to many, many questions – Does the populace of BC have a perspective on Malaysia and on PETRONAS’ imbrication in the finances of  that nation? Are Malaysians aware of economic, environmental and territorial perspectives in BC? … These were some of the stirrings behind this Koboi Kembara Lagi (The Koboi Rides Again) Blog which I initiated in 2015.

Just 2 days ago (July 2017) it was  announced that the PETRONAS LNG Project on Lelu Island would not proceed for financial reasons. While this decision is good news for the fish, for environmentalists and for some natives, others, including many native communities feel that this withdrawal will hurt the economy and consequently the social fabric of society. For the present at least, it seems that the Skeena river and Lelu island are safe from environmental degradation by PETRONAS developments in the context of BC’s resource economy. This relief is however very local, to Lelu island. In the bigger a provincial picture we find that this powerful Malaysian crown corporation is already well entrenched in our LNG economy and, as expressed in the Tyee atticle, involved in environmental controversies that are poorly reported by BC’s mainstream news media.

The Lelu island project was, for PETRONAS, part of a downstreaming exercise designed to maximize profits from PETRONAS’ own primary resource assets that have been developed more discreetly in British Columbia over a much longer period of time. Indeed, the Lelu terminal was intended to bring mainly PETRONAS’ LNG to PETRONAS’ markets in China. The terminal is now not happening but the fracking and its consequences continue. This blog will now follow these activities more closely in search of answers to the abiding question – Can information flows follow global capital and create truly transnational networks and communities of contestation and accord or does the new communications medium create solipsistic circuits of ‘social’ media?  As the Koboi continues his wanderings and his art this Koboi Kembara Lagi blog will go on exploring the implications of Malaysian investments in British Columbia.

Can information flow in the wake of global capital to create truly transnational communities of contestation and accord?

Malaysian oil and gas giant, the PETRONAS Group of Companies is a dominant investor in the British Columbian LNG sector. While Malaysia is undergoing a social and financial crisis of its own, these Malaysian investments have given rise to tribal, territorial, economic and environmental contestations here in BC. Do Canadians have a perspective on Malaysia? Are Malaysians aware of economic, environmental or territorial contestations in Canada?