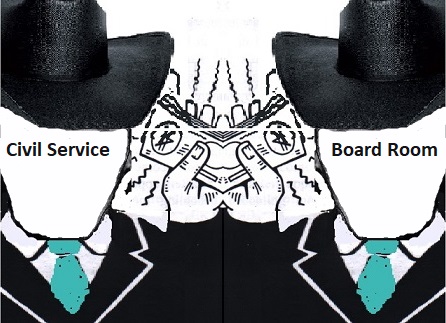 The most striking revelation of the recent House of Commons Justice Committee hearings, for me, was not that the Prime Minister’s Office might have applied pressure on the Attorney General in a prosecutorial matter, not even that the top civil servant might have gone beyond the call of duty in effecting the Prime Minister’s will; no both of these scenarios fall, in my estimation, into the grey zone of governance – the realpolitik that belies the purported exemplitude of Euro-American democracy. No, what amazed me the most was the statement by the sitting Privy Council Clerk (the most senior civil servant in the Canadian government) Michael Wernick that, in the run-up to the crisis, he took a phone call and  Chairman of the Board at SNC-Lavalin, Kevin Lynch. According to Marie-Danielle Smith’s report on his testimony Mr Wernick said the following, “Mr. Lynch as the chair of the board expressed his frustration that he did not understand why a DPA (Deferred Prosecution Agreement) was not being considered and he knew that the board in its trustee relationships for the shareholders in the company was going to have to take some tough decisions in October and November.”

Again, it is not the fact that the purportedly impartial Clerk of the Privy Council took the frustrated call from the Chairman of the SNC-Lavalin Board per se that raised my concern, but the familiarity suggested by the tone and content of what seems to have been said, as well as the fact that the said Chairman, Kevin Lynch, was a former Clerk of the very same Privy Council! What kind of impartiality can we expect from our top civil servants while they serve in government if such powerful corporate positions are theirs for the taking in the wake of their governmental roles? More precisely, the burning question arising from the Lavalin affair is this, ‘What kind of impartiality can we expect from civil servants when their ilk, their peers, these former servants now communicate and advocate on behalf of the most powerful sector of the national polity?’

It seems to me that the parliamentary opposition’s accusations of partiality towards the Liberals directed at Mr. Warnick might be misplaced. Political partisanship does not seem, to me, to the kind of impartiality that is in question. Instead, what we might have been afforded, thanks the clerks own unflinching, unembarrassed, incontrite testimony, is a rare vista on the workings of what might be called the Canadian ‘administrative-industrial complex’ – the imbrication of money (corporations) and power (the civil service) in Canadian governance. There has been a more delicate suggestion that the Clerk’s testimony risks the perception of party bias.  To the contrary, I believe that while while, Mr. Wernick may have shown excessive fealty to Justin Trudeau, there is no clear indication that this loyalty has been towards the leader of the Liberals and not to the Prime Minister of Canada. There is however, indication of a more fundamental complicity in the relationship between corporate Canada and, what I shall call the political machinery of Canada. This will only manifest as political bias if we ever elect a party to government that is not, in one way or another, beholden to these corporate interests.

Can information flow in the wake of global capital to create truly transnational communities of contestation and accord?

Malaysian oil and gas giant, the PETRONAS Group of Companies is a dominant investor in the British Columbian LNG sector. While Malaysia is undergoing a social and financial crisis of its own, these Malaysian investments have given rise to tribal, territorial, economic and environmental contestations here in BC. Do Canadians have a perspective on Malaysia? Are Malaysians aware of economic, environmental or territorial contestations in Canada?