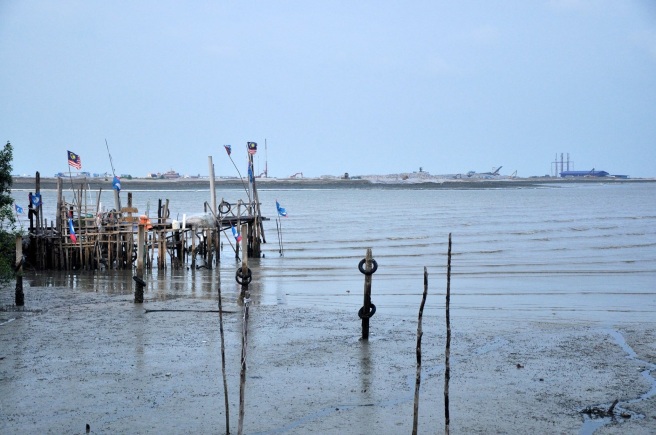 Photographs on Sabine’s Happy Trails   show how the Melaka Gateway project is causing silting in the Portuguese Settlement in Ujong Pasir, Melaka. Sabine notes that this reclamation and development of man-made islands by KAJ Development Sdn Bhd, has violated expert advice from both the EIA (Environmental Impact Assessment) and the SIA (Social Impact Assessment). According to Michael Singho, President of the Malacca Portuguese-Eurasian Association (MPEA), the distance of the reclamation is supposed to be kept at a minimum of 750 meters from the settlement shoreline. Sabine notes that it now appears to be less than 500 meters. 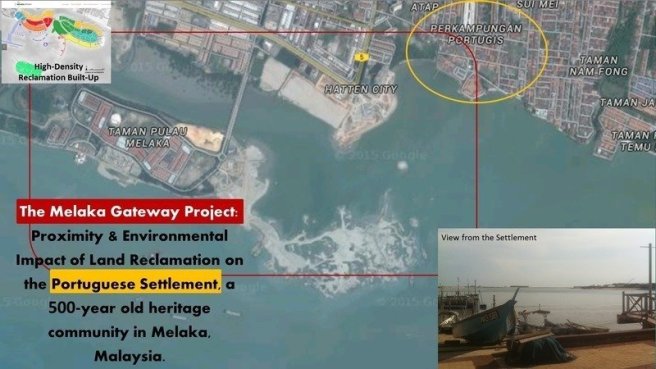 In 2016, President of the Malacca Portuguese-Eurasian Association, Micheal Singho, described the fate of his community in the face of the ongoing Gateway development.

“RECENTLY, there have been reports on China’s RM30 billion boost to the Melaka Gateway project with a signing of a memorandum of understanding.

The approval of the project will snuff the life out of the Portuguese Settlement by depriving it of its life, spirit and culture-sustaining sea.

The Melaka Gateway development will rob the settlement of the open sea and replace it with a waterway that will turn it into a silt-filled, polluted, stinky and dead swamp if the design contours are not altered to studied specifications in the 1997 macro-Environmental Impact Assessment (EIA) report.

Is this morally right and responsible?

Even the basic 750m distance is not adhered to, with portions of the design coming as close as 250m to the settlement.

The project, coupled with the Pulau Melaka project, increases the level of siltation as it does not allow adequate flushing, and impedes vital current flows and tidal movements.

Even the channel between the two man-made islands is narrow and ineffective.

The project is still without a Social Impact Assessment report. Fishermen, whose income are affected, have not been compensated. These violations resulted in a stop-work order issued by the Department of Environment in March last year.

At the last meeting with government agencies and the developer, representatives of the Portuguese-Eurasian community forwarded a proposal that adhered to the tenets of the 1997 macro-EIA report and called for the channel to be a functional waterway free of pollution.

They are still waiting for a response.

MCA president Datuk Seri Liow Tiong Lai, who is also transport minister, has voiced his support and interest in the project.

But, will this come at the cost of a living, profound and contributing legacy falling victim to development?

Liow must recall how the Chinese fought for the preservation of Bukit Cina, a place that provided sanctuary for their dead.

The sea is our Bukit Cina, but with a little difference, as it sustains the living.

Nothing should be allowed to rob whatever is left of the sea and the seafront of the Portuguese Settlement. There are other options that will spare the settlement.”