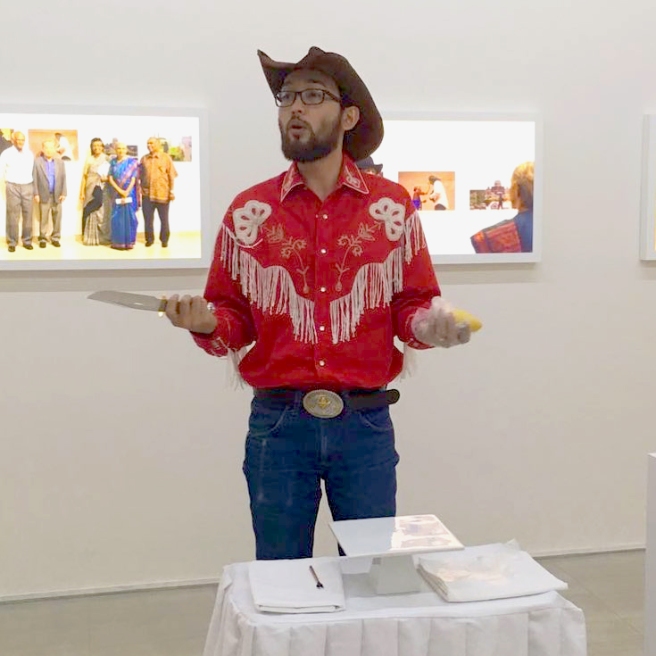 The second Mango performance took place on 2nd December 2016. It was delivered by my ‘accomplice’ John Tung’ who is one of the Singapore Biennale 2016 curators, assistant curator at the Singapore Art Museum (SAM) and a cowboy in his own time too! John spoke of the Singapore Cowboy world and then went on to tell a tale that had been in his remembrance for 14 years. When he was a boy he went on a family outing to have Indian rojak at the Tekka Centre in Little India. The Tekka Centre is a microcosm of Singapore, where the different ethnic communities of the island gather and engage seamlessly. Close to the food court are the fruit and grocery stalls of the market and the young John Tung casually observed an Indian foreign worker purchasing his modest weekly supplies. When he had finished, he stopped at the a fruit stall and picked up a marvelous Indian mango – an Alphonso!!! He asked its price and was told it was SGD 4.50. He smiled to himself, put it back down and walked away. As an allegory, this account is a poignant expression of the unnoticed social history of Singapore and of the human condition at the heart of globalization! As an experience held in memory and shared in narration, it is for John, as he says in the course of his performance,  an instance of the mango transcending myth and entering onto lived experience. Thanks John.

Can information follow in the wake of global capital flows to create truly transnational communities of contestation and accord?

Malaysian oil and gas giant, the PETRONAS Group of Companies is a dominant investor in the British Columbian LNG sector. While Malaysia is undergoing a social and financial crisis, this Malaysian crown corporation’s investments have   given rise to tribal, territorial, economic and environmental contestations across the Pacific Ocean.

Do Canadians have a perspective on Malaysia? Are Malaysians aware of economic, environmental or territorial perspectives in Canada? Can information follow in the wake of global capital to create truly transnational communities of contestation and accord? This is the persistent theme of this otherwise meandering Koboi Kembara Lagi Blog (The Koboi Rides Again Blog).