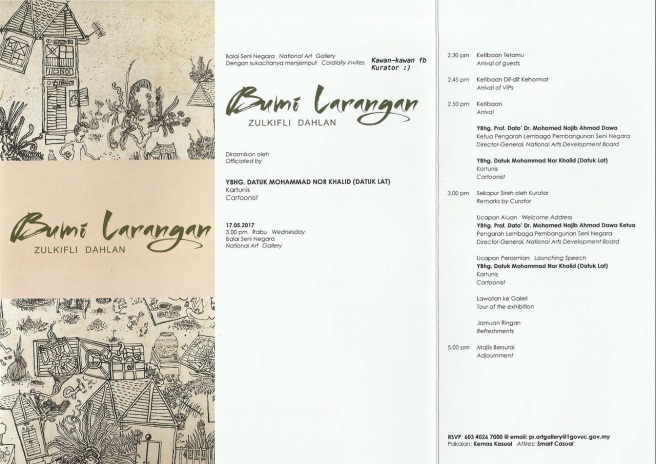 The official opening of an exhibition of the hitherto unreleased drawings of Zulkifli Dahalan was held on the 17th of May at the National Art Gallery, Kuala Lumpur. This exhibition was curated by Nur Hanim Khairuddin who kindly included an essay by myself in the catalogue. After I had completed and submitted my essay to Hanim, I was alerted to Hasnul Jamal Saidon’s extended review of the then newly released film Arrival on his Jiwa Halus Blog. The review was titled THE LATE ARRIVAL OF NON-LINEARITY: A NON-OBJECTIVE REFLECTION ON THE MOVIE “ARRIVAL” and was written as a series of three letters to the films director. I was delighted to find that Hasnul had chosen to conclude PART 3 of this innovative series by citing my own application of Keith Critchlow’s ideas on geometry in my essay on Sulaiman Esa for his Petronas Gallery retrospective Insyrah. Indeed, in Islamic geometry,  the extension from point to line to plane, and back again, carries the allegory of space into that of time. The non-spatiality of the point in geometry and the bindu in Tantra are indifferent from the intemporal consciousness of the Sufi Ibn al-wakt or ‘son of the moment’. Beyond my superficial delight in finding my name at the ‘point’ of closure of Hasnul’s marvellous serial letter, I was profoundly moved by the fact that after nearly two decades with only occasional contact, our inner rhythms seem to be in perfect synchronicity. You see, Hasnul had appraised Arrival in terms of abstraction, geometry and the Islamic ideas of Shirik (interdiction against life-like representations or concentrations), Tawhid (multivalent singularity) and Fitrah (the original state of man). And I, in my newly submitted catalogue essay, had attempted to interpret the figuration and humanism of Zulkifli Dahlan in exactly the very same terms.