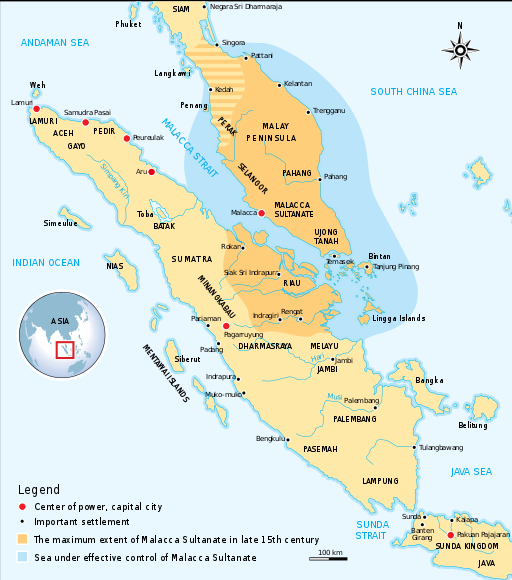 So what is the significance of Malaca (Portuguese), or Malacca (English) or, indeed, Melaka (Bahasa Melayu)? Founded around the 1400 by Raja Parameswara, later known as Raja Iskandar Shah, the Melaka Sultanate rose to the height of its power towards the end of the 15th Century.  At this time, the Melaka suzerainty extended over most of the Malay Peninsula, the Riau Islands and parts of the Eastern coast of Sumatra. The port of Melaka, strategically located, as it is, at the mid-point of the Straits of Melaka, became one of the most important trading ports in the world. Melaka’s place in the geo-political paradigm of the day was exemplified in the oft-cited line by Portuguese explorer and apothecary Tomé Pires, “Whoever is lord of Malacca has his hand on the throat of Venice” – Venice being Europe’s centre of global trade.

While the Portuguese attained this prize in 1511, they killed the golden goose, so to speak! Other trading centers like Acheh, Banten, Bandjarmasin and Brunei arose in the Malay Archipelago and displaced the now Portuguese-controlled Melaka which was unenterprising and decidedly antagonistic to Muslim traders. Melaka never regained its place as the port of choice in the Straits of Melaka during the Colonial era. The British chose to develop Penang and Singapore and given Singapore’s astronomical ascendancy in the post-colonial era (Singapore was according to 2017 statistics the 2nd busiest port in the world), as well as Malaysia’s own development of Ports in Kelang, Johor, Tanjung Pelepas, Kuantan, Penang, Bintulu and Kemaman; Melaka has had to accept its status as a glorious historical relic of the past.